The birth of the internet brought in several new concepts that supported it aptly; the World Wide Web was marked by the presence of websites, portals and forums that soon became galaxies of interest for various commercial enterprises and business ventures.

This was followed by the creative genius of the social media websites. From the outset this was a great way to connect with your old friends and acquaintances that led to social networking and happier times between friends.

However these websites were soon to become one of the major breakthrough arenas for marketing excellence.

The increasing popularity of the social media websites and their growing number of users across the world soon drove the attention of some of the major marketing honchos of the industry.

They knew this was the best time to tap the potentialities of the social media hub; the sites have opened the scope for the visual social media to reach its definitive levels of success.

Over the years of researching through trends of user behavior across social media  networks it has been revealed that pictures are the new in thing among members; they find it easier to express or even relate with the pictures and images that they come across and those posted by their friends.

Status updates and messages have come to be overtaken rapidly by an image that aptly describes one’s moods and feelings. And this has become the latest marketing boon for the corporate world.

What Does Visual Social Media Mean For Companies

More and more companies are realizing the importance of visual social media and its potential impact on the viewers. With the advent of the social media websites companies have found a platform of personalized interaction and bonding with their buyers and patrons.

To this there has been the added advantage available from the sphere of visual social media – picture and images that allow them to gain confidence among potential buyers and clients.

This newfound interest of the users in creative visual content has been appropriately harnessed to gain maximum views and appreciation from their buyers.

Moreover in some instances this has helped companies to create an additional level of confidence among buyers. This will likewise help to increase the buyer’s interest in online shopping. 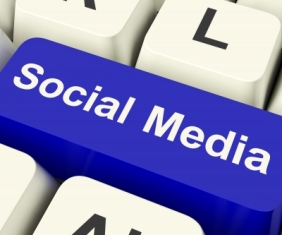 How Can A Company Use Visuals In Social Media

The use of visuals in their content used within social media websites add to a greater creativity and transparency of information. For instance a fashion designer displaying a particular design can also illustrate the use of seams and cuts in the same with supplementary images.

In the same way for most established and well known jewelry brands there is a suitable use of visuals of their latest collections that does the talking.

Another sphere that has benefited plentiful from the use of visual social media is the world of watches. In almost every social media network there is a presence of some of the best known watch brands of the world.

Quite naturally the patrons and admirers of the companies find it very alluring when they are presented with the latest images of some of the finest examples of design and manufacturing creativity.

Imagine the difference for yourself – you have just provided content with a status update on behalf of your company across several social media networks.

The information is on the launch of the latest line of clothes in your flagship store. This may be interesting for those who are loyal buyers but difficult to remember for potential and new buyers.

However there is an alternative means that will work wonders for both the loyal buyers and the newer ones. Use a prolific image instead – it will create an impact of realistic feel for the range of clothes that the buyers expect to see when they walk in to the store.

It will likewise add to their curiosity, liking and more importantly the urge to own particular clothing ranges that they see on the website.

However for an effective impact of a post from your company will require a high level of photographic creativity and selection of images for the same.

Search engine optimization that had otherwise depended mainly on certain aspects like web content and flow of web traffic of a website has also broadened its parameters of websites performance.

Ranking of your content by search engines will be done on the basis of its audience capturing capacity with the kind of comments and sharing ratios of the images; this makes it important that the content created viewer friendly that is capable of attracting their time and response.

How to Make Money Creating an Online Magazine

From Product to Shipping: The Complete Guide to Running An Online Shop